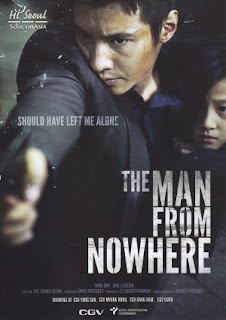 ¨ You live only for tomorrow. I only live for today.¨

Korean films have been making a lot of noise in the past decade and many critics believe that they are making the best films at the moment as well. I only had the opportunity to watch The Host and Oldboy before getting around to watching The Man from Nowhere (Ajeossi). Oldboy is considered by many as one of the best all time Korean films, but I wasn’t too overwhelmed by it. I thought it was good, but not enough to get me interested in Korean films. The same thing happened with The Host, but now I that I`ve seen The Man from Nowhere directed by Jeong-beom Lee I want to see more. I really loved this movie and thought it was great. It was a character driven action film with some powerful scenes and a memorable lead performance by Bin Won (who also worked in Mother, another successful Korean film). This film reminded me a lot of a couple of Western films like Man on Fire and Taken, but with the extra ingredient of being from Korea so you would expect better fight scenes and a much darker tone. The film is very dark at times and violent, but it also has interesting characters and a gripping story. The story isn’t original, we`ve seen it before many times, but the mood of the film and the lead performance are what make it so entertaining. This movie had it all. My only complaint was that the melodrama was a bit over the top. There were a couple dramatic scenes that didn’t work too well, but the spectacular fighting scenes made up for it. This movie was better than I expected and loved it much more than the other Korean films I had seen. Now I just want to watch more.

As I mentioned before the plot isn’t very original. We have the quiet and reclusive man, in this case a pawnshop owner named Cha Tae-sik (Bin Won), who has a hidden and violent past. He lives a solitary life and isn’t much of a talker. His life changes when a neighboring little girl named So-mi (Sae-Ron Kim) begins intruding his life and trying to befriend him. She`s a smart girl who lives with her drug addict mother, Hyo-jeong (Hyo-seo Kim). When her mother decides to steal some drugs from a dangerous drug trafficking organization, everything changes for Cha Tae-sik. First of all Hyo-jeong hides the drugs in a bag which she leaves at the pawnshop without Cha`s knowledge. When the dealers catch up with So-mi`s mother they kidnap both of them and force Cha to deliver the drugs to another dealer. Cha accepts to deliver the drugs as long as they don`t touch So-mi, but what he doesn’t know is that the deal is a set-up to eliminate another drug ring leader and that they have no intention of letting them go. Cha discovers Hyo`s body which is missing several organs and realizes that he`s not only dealing with a drug trafficking cartel, but an organ dealer one as well. That is when Cha Tae-sik begins hunting down the men responsible for the kidnapping of So-mi and unleashing his merciless fury. The drug dealers have messed with the wrong man.

Despite the story being predictable, it is memorable thanks to the great action scenes, which are brutal and violent at times. The film also owes great deal of its success to Bin Won for his performance in the lead role, in the same way that Taken worked thanks to Liam Neeson or Man on Fire thanks to Denzel Washington. He had the look and the qualities you would look for in this type of film. Bin Won is one cool dude no matter how he cuts his hair. Yes the film has several clichés and melodramatic moments, but it stands out from those average movies and delivers some memorable scenes. There are great choreographed fighting scenes, especially near the end of the film in the climatic final battle, and there are also some great shots like one in which the camera follows Bin Won as he jumps out of a window from a second floor. These qualities are what make The Man from Nowhere stand out from other similar movies and the film will stick with you long after the credits have rolled. I will definitely be checking out more Korean films like this one because they have a unique atmosphere and setting. I really loved the dark mood of this film and how they mixed it with some humorous moments.

http://estebueno10.blogspot.com
Posted by Esteban Gonzalez at 22:01